The average Social Security retirement benefit fell short by 46% in 2022. Here are the costs that went up the most 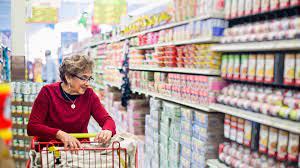 Even as a 5.9% cost-of-living adjustment went into effect in January, the record-high annual benefit increase still fell short, according to new research from The Senior Citizens League.

The average retiree benefit increased to $1,656.30 in 2022 from $1,564 in 2021 — a monthly boost of $92.30, according to the nonpartisan senior group. Yet in every month this year, a bigger increase was needed to keep up with soaring costs due to inflation, the research found.

Social Security’s annual cost-of-living adjustment, or COLA, is based on the Consumer Price Index for Urban Wage Earners and Clerical Workers, or CPI-W. The annual change is calculated based on the index’s average for the third quarter, which is compared to the third-quarter average for the previous year.

In January, beneficiaries can expect to see an even higher increase — 8.7% — that will top last year’s record.

Yet as inflation outpaced the COLA for 2022, households ages 65 and up found it more difficult to pay for everyday items.

‘Even the simplest of foods are harder … to afford’

The fastest-growing cost was home heating oil, which spiked 68% from October 2021 to October 2022, according to The Senior Citizens League.

“Even the simplest of foods are harder for people to afford,” said Mary Johnson, Social Security, and Medicare policy analyst at The Senior Citizens League.

For low-income retirees who have spent down their retirement savings, absorbing those higher costs may be particularly difficult, she noted.

Medicare Part B also saw higher increases in 2022, with the standard premiums going up by 14.5% to $170.10 per month. Those monthly premiums are typically deducted directly from Social Security checks.

As 2023 approaches, Social Security beneficiaries will be poised to see more of the record 8.7% increase that goes into effect, as standard Medicare Part B premiums decline by 3% to $164.90.

“The good news … is people are realizing 100% of the 8.7% lift,” David Freitag, a financial planning consultant and Social Security expert at MassMutual, recently told CNBC.

The agency is currently sending statements to beneficiaries that include the exact amounts of their increases for next year.

“The COLA is going to boost their benefits really by a record amount,” Johnson said.

“This is the biggest one that most retirees alive today have ever received,” she said.

Just how far that extra money goes next year will depend on how inflation fares in the coming months.

If higher prices subside, that may point to a lower cost-of-living adjustment for 2024, Johnson said. An exact measurement will be based on CPI-W data for the third quarter of next year.