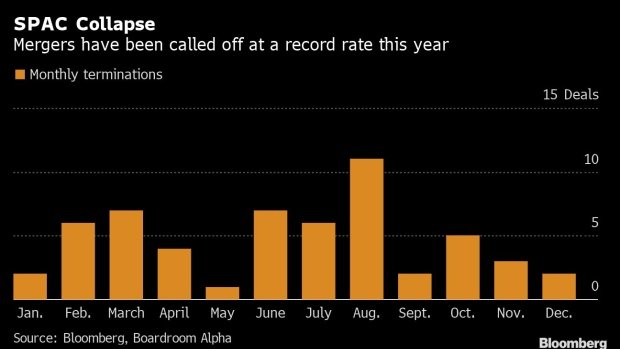 One of the SPAC industry’s most well-known sponsors and a would-be serial backer have seen deals worth $10.6 billion go up in smoke in less than an hour.

Alec Gores, one of the most well-respected sponsors, said Monday that Gores Holdings VIII Inc. would not be merging with materials science tech company Footprint. Meanwhile, Concord Acquisition Corp., whose chairman is former Barclays CEO Bob Diamond, pulled the plug on its tie-up with a stablecoin issuer, dealing a blow to retail traders and Cathie Wood’s Ark Investment Management.

The pair of cancellations, which happened less than an hour apart, is a sign that industry titans and financial heavyweights with pending mergers aren’t safe as the craze for deals with special-purpose acquisition companies goes bust.

More than 55 transactions have been terminated this year as the market sours on speculative industries, particularly the SPAC market. Those canned deals account for just a portion of the more than 65 sponsors to shut down operations, a dire signal for the roughly 470 teams still looking to strike partnerships.

“Sentiment turned so much on the ability to actually get a deal done,” Enrique Abeyta, editor at Empire Financial Research, said in an interview last month. Rising redemption rates, which point to how many investors are exchanging their shares for their money back, are a big reason why so many deals are falling apart, Abeyta said.

Footprint, which holds the naming rights for the Arizona arena where the NBA’s Phoenix Suns play, had been assigned an enterprise value of $1.6 billion when the deal was announced late last year. Circle Internet Financial’s tie-up with Concord saw its value double to $9 billion earlier this year after improvements to its financial outlook and market position.

Concord’s sponsors will throw in the towel and return roughly $10.17 a share to investors, the SPAC said in a subsequent filing. The stock closed at a high of $13 in November 2021 and garnered attention from Wood’s Ark Investment, which is among the SPAC’s biggest investors with about 3.2 million shares, according to Bloomberg data. Her ETFs snapped up 222,800 shares last November, when the stock traded above $11 and bought 278,000 more in February on a day that it closed at $10.37, according to trading updates.

For Concord’s Diamond and CEO Jeff Tuder, the merger with Circle was expected to be the first of three offerings. All told, the group, backed by Atlas Merchant Capital, raised $900 million across three ventures. While none of the three have announced deals, however, the other two have until at least the middle of next year to complete mergers.

SPACs backed by the Gores Group have been successful on plenty of deals. The firm helped bring Hostess Brands Inc., the maker of Twinkies, public back in 2016. Verra Mobility Corp., which provides technology to manage tolls and registrations for vehicle fleet operators, went public via a Gores SPAC two years later. Both stocks trade above the $10 mark at which SPACs typically go public and are among the best performing de-SPACs, data compiled by Bloomberg show.

The market for SPACs has been hit by a broader rout in more speculative assets amid concerns about tighter regulation from the US Securities and Exchange Commission. The De-SPAC Index is down 71% in the past 12 months compared with a 13% drop in the S&P 500 Index. More than one-third of the roughly 400 companies that merged with a SPAC is trading below $2 a share.