Inflation hits a 40-year high of 8.5 percent because of war in Ukraine, rent hikes 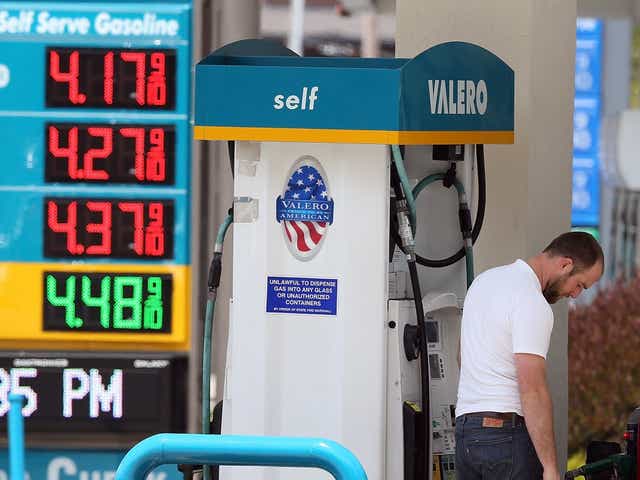 A survey by the financial data group FactSet had predicted that the
inflation reading for March would come in at 8.4 percent year over
year — the highest rate since December 1981 and an increase from
February’s 7.9 percent.

Although gas prices have begun to trend downward recently, the change
was not reflected in the inflation reading for March — when prices at
the pump reached record highs. Gas prices jumped by 48 percent year
over year, the BLS said, and climbed by 18.3 percent from February.

Meanwhile, rental rates have increased for eight consecutive months,
and they are now above the pre-pandemic trend. Rents climbed by 5.1
percent in March year over year, compared with 4.2 percent in
February. The average rent for a two-bedroom home in the U.S. is about
$2,000, according to research from Rent.com — up by 22 percent year
over year basis.

Other categories that hit at or near record highs in March included
groceries, up by 10 percent year over year; new cars, up by 12.6
percent; and home furnishings, up by 10.8 percent.

“Robust pay increases have been no match for the higher costs
households are facing on rent, food, electricity, gasoline, and a
pervasive list of both goods and services,” Bankrate.com Chief
Financial Analyst Greg McBride said in a note Friday. “The buying
power of Americans is being squeezed more and more each day, and you
see this reality reflected in the dour consumer sentiment readings.”

“Core” inflation, which excludes volatile food and gas prices, climbed
by 6.5 percent year over year and by 0.3 percent month over month —
slightly less than the figures FactSet analysts expected. The soft
reading was driven by the biggest drop in used vehicle prices since
1969.

All signs point to the Federal Reserve’s moving forward on its plans
for a series of interest rate hikes to help slow the economy and fight
inflation. Last month, it raised its key federal fund’s rate from near
zero to a range of 0.25 percent to 0.5 percent. It projects at least
six more rate hikes this year.

Yet some economists now say the Fed is facing inflation forces it
cannot easily control. The shock to energy prices from Russia’s
invasion of Ukraine, in addition to supply chain constraints from the
coronavirus pandemic, mean higher prices for goods could persist.

That, in turn, is pushing consumers’ expectations of inflation higher.

“The longer inflation remains high, the more it gets embedded into
wages and other contractual arrangements,” Alan Blinder, a former
Federal Reserve vice chairman and an economist at Princeton
University, said in a Wall Street Journal op-ed last week. “When
workers see inflation coming, they want to be compensated for it. And
once higher inflationary expectations get entrenched, they affect the
price- and wage-setting throughout the economy, making a soft landing
harder to achieve.”

Jason Furman, a former White House chief economist, wrote last month
that the Fed will be lucky if it is able to pull inflation back to a 3
percent annualized rate.

“If inflation does settle there, it would be very painful to bring it
down much more,” he said, adding that doing so would likely require
engineering a recession.

The Fed “should make clear that it will continue its steady increase
in interest rates as long as inflation remains substantially elevated
and the job market is not worsening,” Furman said. “This type of soft,
data-dependent forward guidance would help tighten financial
conditions today.”

Other economists are more sanguine about whether households can absorb
higher inflation.

“We see some notable factors helping households today,” Wells Fargo
economists said in a note on March 31. “Households are in decent
financial shape and this should not be overlooked,” the note reads,
concluding: “Wage growth has been robust and shows few signs of
slowing amid strong demand for labor. This is beneficial to households
even if inflation is currently eating into much of the recent gain.”

Wells Fargo highlighted that the personal saving rate rose to 6.3
percent last month. Because that is below the pre-pandemic rate of 7.8
percent, it implies a decline in “excess” savings. The bank estimates
that $2.3 trillion in excess savings is outstanding.

“We expect a decent chunk of it is at the disposal of households
should they wish to rely on it,” they said. “More simply, we expect
households to save less in the near term to offset some of the hit to
purchasing power from rising inflation. If they don’t, spending could
falter more than we presently forecast.”

There’s at least one sign that inflation could cool sooner than
expected, given the gradual slowdown in the housing market and an
improving outlook for semiconductor supplies. Recent used-car sales
data show vehicle prices have declined for two consecutive months,
according to Cox Automotive’s Manheim Market Report.

If the end of price hikes in that sector can filter through elsewhere
and begin to put pressure on wages, inflation could even return to
below the Fed’s expectations level, Ian Shepherdson, the chief
economist at Pantheon Macroeconomics, said in a note to clients
released Monday.

“The idea that overall core inflation can return to 2 percent over the
next year — even with rent inflation still running hot — is entirely
reasonable, if you believe that improving chip supply will trigger a
move towards mean reversion in margins, while slower wage growth eases
pressure in much of the non-rent services sector,” he wrote.

In other words, Shepherdson suggests that a better outlook on the
inflation front could hinge on the semiconductor supply’s returning to
normal and wages’ stabilizing to the point that consumer prices begin
to cool down.

While he expects core goods inflation, excluding autos, to remain high
until supply constraints ease, he wrote that such components account
for less than 10 percent of “core” inflation readings.

“We think [readings of inflation expectations] put too much emphasis
on the very recent past,” he wrote. “Things change.”