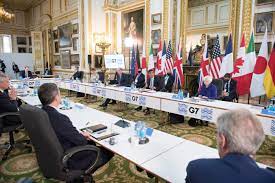 Corporate tax rates in major economies around the world have fallen to
an average of just 25.1% this year, according to a study released
Friday by the UHY international accounting firm network.

With the COVID-19 pandemic leaving a gaping hole in the public
finances of many countries, however, UHY predicts the trend of
declining corporate tax rates worldwide is likely to be over for the
foreseeable future. For example, the U.K. government recently
announced its intention to raise corporate tax rates to 25% starting
in April 2023, more than two percentage points higher than the
European average. Argentina has already increased its headline
corporate tax rate from 30% to 35% in 2021. President Biden has also
pledged to raise federal corporate income tax to 28% in the U.S. after
it was cut to just 21% by former President Trump in 2017, although
Biden’s tax proposals have been facing resistance from Republicans and
some Democrats in Congress and he was unable to pass the Build Back
Better Act last year.

Global corporate tax rates have been steadily declining in recent
years, with the G7 average for a business recording profits of $1
million falling from 32% in 2014-2015 to just 26% in 2020-2021. Many
countries have tried to incentivize companies to invest in their
economies by offering enticing tax rates. France, often seen as a
higher tax European economy, has lowered its headline tax rate from
31% to 26.5% in the past three years.

“Countries around the world have wanted to remain competitive by
keeping the tax burden on companies as low as possible in recent
years,” said UHY chairman Subarna Banerjee in a statement. “The
cash-strapped governments of 2022 will likely now be considering
increasing taxes on corporates. Public finances will have to be shored
up somehow and corporates can be an easier target politically than
individuals. Businesses worldwide should be prepared for their tax
costs to begin to rise in the coming years.”

The Netherlands recently decreased its corporate tax rate to 16.5% for
companies with taxable income under $450,000, while Croatia now offers
a rate of just 10% for companies with a turnover of less than
$1,125,000.

The Organization for Economic Cooperation and Development announced in
October that 136 countries had signed a deal to enforce a minimum
corporate tax rate of 15% starting in 2023. The OECD deal will allow
countries to tax multinationals that make sales within their
jurisdictions even if they lack a physical presence there. As a result
of growing political pressure, some lower-tax jurisdictions will
probably now have to increase their corporate tax rates for
multinational companies, UHY predicted. Countries such as Ireland have
come under fire for their low corporate tax rate of just 12.5%.

Treasury Secretary Janet Yellen has been pushing for countries like
Poland to agree to the OECD deal, although the minimum tax deal is
facing skepticism in the U.S. from Republicans and some Democrats in
Congress. Such a deal may require the Senate to ratify new tax
treaties, which would be unlikely to happen.

Multinational corporations have become one of the biggest targets for
government clampdowns worldwide, with some multinationals choosing to
operate from lower-tax countries, as they record lower profits in
higher-tax countries.

Developing nations surveyed by UHY generally already had higher
corporate tax rates than their more economically developed
counterparts. India’s tax rates increased to 34% for the largest
corporations, with Nigeria implementing a headline rate of 32%, and
Argentina charging its resident companies 35% on their profits.

Some countries may be hesitant to raise taxes further than the high
levels they now levy. Japan already taxes its companies at rates up to
38.2%, while Malta has similarly high rates at 35%.