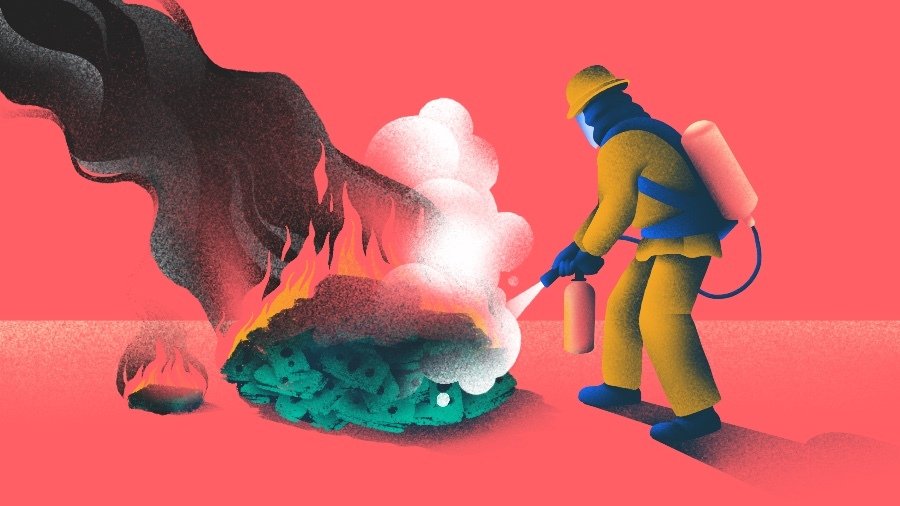 A year ago, startup founders often found themselves fought over by
venture investors eager to grab a piece of any promising young company
with fast growth potential. Investors competed in an increasingly
heated environment in which they were often under pressure to close
outsized deals in a matter of days. All told, venture capitalists
spent a record $643 billion in 2021, almost double what they had the
year before.

But times are changing. Global venture investment in the first quarter
of 2022 dipped 13 percent quarter-over-quarter, marking the first time
in a year of funding records when startup capital investment fell from
one quarter to the next.

Rising inflation, a stalled IPO market, and ongoing instability
sparked by Russia’s war in Ukraine have injected new caution into
startup investing. As a result—with the next VC check suddenly not as
certain as it may have been even a few months ago—investors and others
in the industry say startup leaders should consider tamping down on
spending and conserving cash.

Jai Das, the partner, president, and co-founder at Sapphire Ventures,
said his firm is evaluating portfolio companies on a series of metrics
to make sure their cash burn is where it should be.

Cash burn essentially refers to the rate at which a startup is
spending its venture capital. The issue is especially important for
venture-backed startups, especially when the fundraising environment
is iffy. That’s because startups are usually not yet profitable: Any
revenue they generate is typically plowed back into the business in a
bid to scale as quickly as possible.

Das said he is making sure general and administrative and R&D expenses
at his portfolio companies are in line with those of other
companies—including those that are public—in the space. He is also
making sure sales and marketing teams are hitting their quotas and
creating pipelines.

“Cash is king right now,” he said. “I’m trying to tell people now is a
bad time to be raising money and you should have at least 18 to 24
months of runway.”

Getting out the fire hose

Startups can extend their runway by pulling back on hiring, shedding
big expenditures like real estate, and in rare cases, laying off
employees.

While we haven’t yet seen widespread bloodletting in the industry,
several prominent startups have laid off employees en masse this year.
The most prominent of those is mortgage startup Better.com, which has
reportedly slashed its headcount from about 10,000 in December to less
than 5,000 as of this month. Company leaders blamed a declining
mortgage industry and said the cuts, while painful, will “further
position Better on its pathway to profitability.”

Other startups with significant layoffs this year include:

Indian ed-tech startup Unacademy reportedly cut about 1,000 jobs
earlier this month in a bid to conserve cash.
E-commerce startup Fast abruptly shut down and laid off its workforce
of about 450 people after raising $100 million from investors. The
company reportedly had annual revenue of only around $600,000.
Cosmetics company Glossier, most recently valued at $2 billion and at
one time believed to be a 2022 IPO candidate, earlier this year laid
off about 80 employees, or a third of its corporate workforce.
Home-buying startup Knock laid off nearly half its workforce and
scrapped plans for an IPO, instead of raising $70 million in fresh
private capital.
Automation software firm Hyperscience laid off 100 employees, or about
a quarter of its staff, last month. The company has raised nearly $290
million from venture investors.

But despite some prominent examples of cost cuts, investors we spoke
with say they’re largely advising their startups to stay the course
and be mindful of cash spending, while still aiming for solid growth.

This time is different

Some startups are still posting strong growth numbers despite the
downturn in the VC market. Yash Patel, the general partner at Telstra
Ventures, said he still sees later-stage portfolio companies with
sound fundamentals that are growing 2x to 3x. In those cases, he is
most concerned with creating more runway for companies than cutting
costs.

“I think extending around makes sense now,” he said. “We don’t know
how long this may last. … Taking a little more dilution now for cash
to grow may make sense. It buys more runway.”

He sees early-stage companies as being less affected right now by the
downturn, although many new founders of such startups may have to
temper their expectations since the funding environment is different
than last year.

While Patel said he planned to see rounds with pay-to-play provisions,
he has yet to see them during the downturn. Pay-to-play rounds
basically require existing investors to invest on a pro-rata basis in
current or future rounds or lose some of their preferential rights.
Such provisions are sometimes added to down rounds to make sure
previous investors pony up.

Scaling back hiring provides another way startups can conserve cash,
in some cases adding only a fraction of what they had hoped to add to
their workforce this year, Patel added.

Profitability also is something that may be talked about more, but
thus far in conversations, it is not a demand from investors, said
Patel.

“I’m not as concerned as I have been in previous cycles,” Patel said,
adding the current environment is much different than that of March
2020, when many thought a Black Swan event was underway.

The main ways companies control cash burn are by managing fixed costs,
said Stefano Bonini, an associate professor at Stevens Institute of
Technology whose research has focused on corporate finance and venture
capital.

Fixed costs will “eat your entire company funding if you’re not
careful, especially in a high-interest rate environment,” he said.

Headcount growth is one of the easiest ways to manage fixed costs,
Bonini said, so we’ll likely see startups pull back on hiring. When
they do hire, many may opt to carefully select candidates who are more
expensive but can contribute to the company long-term.

Compensation packages may also skew more toward equity rather than
cash, he said.

Many startups will benefit during the current “tightening period” from
the cost-cutting they did when the pandemic hit. In 2020, companies
quickly pivoted to remote workplaces, reducing fixed costs for office
space and travel, Bonini noted.

It’s unlikely some of those fixed costs will return to pre-pandemic
levels, he added. “It brought a lot of companies’ costs down,” he
said. “Renting offices in Silicon Valley or New York City is
expensive.”

As last year wound down, Ken Ahrens and his fellow co-founders at
Atlanta-based SaaS startup Speedscale considered going out for a
Series A.

“We did wonder if we were moving too slow,” said Ahrens, CEO of the company.

However, the Y Combinator company was doing well, with money still in
the bank from its seed round in late 2020 and paying customers.

“The key to fundraising is having something really smart to spend
money on and we really didn’t,” he said. “We wanted to work on
product-market fit and work on the business.”

Ahrens hopes that strategy pays off. He understands the current market
is tough to raise funding in but hopes to lock up around closer to the
end of the year. By that time, he believes he will be able to show
investors strong growth metrics, as well as product-market fit.

The seven-employee company is pretty disciplined about budget and
always has been, so reining in cash burn has not been necessary,
Ahrens said.

“We track our numbers closely,” he said. “We’ve made a few adjustments
here and there, but we are still about 90 percent based on our plan
from earlier this year.”

The company is tapping more into the contractor market for both
engineering and sales. Ahrens said he likes working with contractors.
It allows the company to scale up to certain projects that work while
closing down others that don’t.

Although the company has “ample runway,” in order to hit the goals the
company already has in place in 2023, the company will need to
hire—and that means a Series A, Ahrens said.

“I’m feeling bullish for us,” he said. “The market is turning to
self-sustaining companies and I feel that will help us.”

A new sense of caution

In Latin America, which was the fastest-growing region in the world
last year for venture funding, investors are also considering how to
contend with a changing economic environment. While funding levels
remain historically high, the region did see a slowdown in Q1, with
the pullback most pronounced at later stages.

With late-stage startups likely to stay private longer and face a more
challenging fundraising environment, it’s more imperative for teams to
demonstrate an ability to operate and grow on a lean budget, Cai said.
This shouldn’t be a problem for many Latin American unicorns,
particularly those who learned to scale when venture funding to the
region was much lower.

Others who were raised during the boom times, however, “grew up with
high overhead and not great unit economics,” Cai said. They’ll need
both discipline and time to grow into their peak valuations.

Matthew Koertge, the managing partner at Telstra Ventures, said his
firm tries to be proactive with portfolio companies that may be in
trouble. Sometimes that includes helping them make difficult
decisions.

“Here the focus is on reducing cost basis, break-even cash flow,
restructuring and refinancing to help them survive until the next
stage,” he said. “We’re not there yet, but we have experience steering
startups through difficult fundraising periods over the past 20 years,
including during the dot-com bust.”