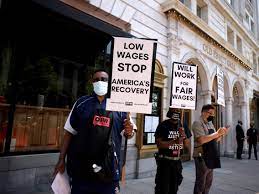 The federal minimum wage has been $7.25 per hour since 2009.
Starting this month, workers in Connecticut, Nevada, Oregon, and
Washington, D.C., are seeing higher minimum pay rates.
Some experts say a higher federal standard for hourly pay is needed.

Workers earning minimum wage are getting an income boost in some parts
of the U.S., thanks to higher pay rates that went into effect this
month.

Connecticut, Nevada, Oregon, and Washington, D.C., all had new higher
minimum wages as of July 1. Those increases come as the federal
minimum wage stands at $7.25 per hour, unchanged since 2009.

“Right now, it seems somewhat stalled,” said Pamela Loprest, a senior
fellow at the Income and Benefits Policy Center at the Urban
Institute, of the push to raise the federal minimum wage.

Meanwhile, some states and localities have taken up the issue, with
Florida and Delaware moving to a $15 per hour minimum wage. Companies,
such as Amazon, Target, and Walmart, have also stepped up and
established higher minimum pay rates for employees.

The states’ moves and the private sector increases seem “like an
alternative in the stalemate of federal changes,” Loprest said. “It
certainly is the next best way to have change come about.”

How higher wages may help businesses

While some argue higher minimum wages could place a burden on small
businesses, the opposite is actually true, argues Holly Sklar, CEO of
Business for a Fair Minimum Wage.

“If you’ve got a worker at one business, they’re customers at many
other businesses,” Sklar said.

“It’s a really, really great way to spur consumer demand, to put money
in the pockets of local customers for local businesses,” she said.

Paul Saginaw, co-owner of Saginaw’s Delicatessen in Las Vegas, said he
is glad to see the minimum wage in Nevada go up, though he is already
paying employees a higher rate of at least $14 per hour.

“I don’t think I’ve ever paid anybody minimum wage in my entire life,”
said Saginaw, who also co-owns businesses in Ann Arbor, Michigan.

Job openings and voluntary departures are still at record highs,
according to the latest government data, pointing to a persistent
quitting trend among workers that’s been dubbed the Great Resignation.

Admittedly, high inflation has made it more difficult to give pay
raises, Saginaw said, and also presented challenges for his business
to find ways to cut extraneous costs to avoid raising prices.

Some economists have expressed concerns that a higher federal minimum
wage could fuel inflation, an idea Biden has rejected amid calls for a
$15 per hour rate.

That argument makes sense to David Cooper, director of the Economic
Analysis and Research Network at the Economic Policy Institute because
low-wage jobs are not concentrated in industries that are behind
rising prices.

While state and city efforts to raise minimum pay rates to help, there
are still roughly 20 states that base their minimum wages on the
federal rates.

“It would be much better if we just raised the federal minimum wage”
and did what a lot of these states and cities are doing already, which
is building in an automatic adjustment for inflation or changes in
wages, Cooper said.