Are You Rich? The Answer May Surprise You 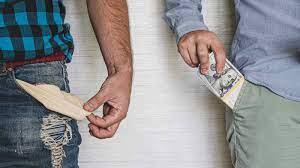 Whether you are considered rich depends on how you measure it – and the bar for that is changing. Have a look at the numbers that define who’s wealthy today.

This is a question that many people ask themselves in quiet moments but would never have enough nerve to say out loud.

What does “being rich” mean? As it turns out, the definition seems to be changing.

What’s the Dollar Figure for Being Rich?

How much money do you need to be considered rich? Well, according to Schwab’s 2021 Modern Wealth Survey(opens in new tab), Americans believe it takes a net worth of $1.9 million to qualify a person as being wealthy. (Net worth is the sum of your assets less your liabilities.)

To get a clearer picture of where you rank, check out this wealth report card:

If you still want to picture where you fit, consider that there are 6.7 million people with a net worth between $1 million and $5 million.

A Different Measure of Wealth: The American Dream

This was so embedded into the American psyche that the dictionary(opens in new tab) deems it to be a “noun phrase.” The definition is: “A happy way of living that is thought of by many Americans as something that can be achieved by anyone in the U.S. especially by working hard and becoming successful.”

Success was not defined, but the American Dream also typically includes the idea of owning your own home, being married, and having 2.3 children.

Figure in the Racial Wealth Gap

Unfortunately, the American Dream is not available to everyone. Housing equity(opens in new tab) makes up about two-thirds of all wealth. We know that there is discrimination in employment and wages. But even for African-American families that do earn decent incomes, housing policies, redlining, and other discrimination have prevented them from acquiring land and housing to achieve the American Dream. The average wealth for white families is seven times higher than the average wealth for black families. More than one in four black households have zero or negative net worth, compared to fewer than one in 10 white families.

It’s shocking when you look at the U.S. wealth gap with minority groups. Net worth is more than just dollars and cents. It also needs to be looked at through a kaleidoscope of education, race, ethnicity, homeownership, family size, and access to credit, among other things.

The New American Dream for the Next Generation?

Gen Y and Gen Z seem to be more excited by the quality of earnings and not by the quantity of money. Even the Schwab survey “found that respondents are lowering the bar for what they consider wealthy. Compared to 2021 ($1.9 million) standards, respondents to the 2020 survey described the threshold for wealth as being a net worth of $2.6 million.”

The next generation is redefining the American Dream, but some of the basics we still hold. According to a survey conducted by Echelon Insights in 2020,(opens in new tab) 81% of this next generation does believe that hard work will allow them to achieve success, as they define it. They want the freedom to choose what to be, financial well-being, family, a good job, and housing. They also really value work/life balance.

What makes this generation very different than boomers is that they are willing to leave a job to find the freedom and the job quality they want.

My generation “sucked it up” when we worked for a tough boss. But this generation is quitting when they work for a jerk. Employees today are feeling stressed and tired. More than one in three Gen Zers find it difficult to cope with pressures(opens in new tab) at work. They are looking for a sense of purpose in their work and want real social and interpersonal connections. A recent McKinsey(opens in new tab) study also found that “Yes, they want to pay, benefits, and perks, but more than that they want to feel valued by their organizations and managers.”

This is proven by the numbers. More than 19 million U.S. workers have quit their jobs since April 2021. Most of the people quitting are Millennials.(opens in new tab) But it’s important to note that a study by Adobe(opens in new tab) found that “more than half of Gen Z respondents reported planning to seek a new job within the next year.” The “woke” world has deemed this phenomenon the Great Resignation. This goal of seeking quality of life changes the definition of what it means to be “rich.”

The new American Dream is yet to be firmly defined. It appears as if it will include a shift from in-office work to a hybrid schedule that includes some remote work. Technology will obviously have a lot to do with this shift. If you have a hands-on job, remote work may not be an option.

Do You Want Money to be Your Life’s Report Card?

Is more really better? I raised my kids to believe as I do: that being rich means that you will never worry about being hungry or having a safe place to live and also have enough to give to charity. It seems like after saying this, you should be clasping hands and singing Kumbaya. But this definition may relieve many people from looking over their shoulders to figure out what “the Joneses” are doing and always feeling like a failure. Wealth, however, is in the eye of the beholder. It is also a generational thing.

I guess the best piece of advice came from David Rockefeller. He was the CEO at Chase Bank when I was a budding executive. I was fortunate to work with him on occasion. One day we were talking about wealth. I asked him how it felt to be one of the richest men in the world. He basically told me that it’s not about the money, it’s about the legacy you leave behind. Then he quipped, “Let’s face it, you will never see a hearse with a luggage rack.”